By Gianluca Carella30 May 2018February 21st, 2019Master Of Science
No Comments 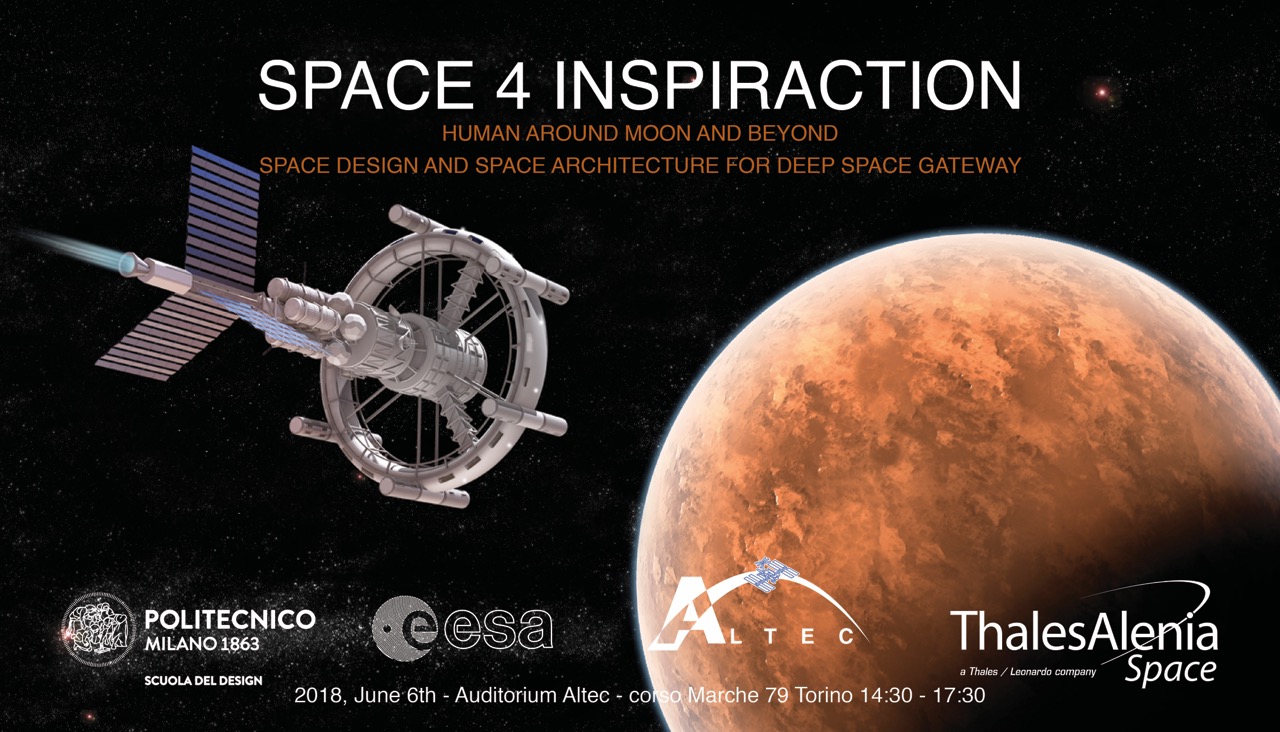 The School of Design of Politecnico di Milano and Thales Alenia Space together in a project to explore new habitat scenarios for the Deep Space Gateway cis-lunar station.
The  Space4InspirAction course, created by professors  Annalisa Dominoni and  Benedetto Quaquaro in 2017 at the  School of Design of Politecnico di Milano – within the International Master’s Degree in Integrated Product Design – is the only one in Europe to have the recognition and support by  ESA (European Space Agency) through experts and scientists who suggest and then deepen the project themes in line with the objectives of the Space agencies’ strategic programs.
The second edition 2018 was also able to count on the presence of  Thales Alenia Space, Joint Venture between Thales 67% and Leonardo 33% – the world’s leading player in the construction of space habitats – who chose the collaboration with the Space4InspirAction course to design the new  Deep Space Gateway cis-lunar station, on which all the Space agencies are concentrated at this time.
The collaboration between the School of Design and Thales Alenia Space is not a spot project, but the beginning of an  ongoing agreement over time to ensure the development of innovative projects in which the contribution of design discipline is fundamental and strategic to generate “disruptive” ideas and visions for architecture and habitability in Space, with particular attention to human factors and interactions between operator and instrument.
“The  multidisciplinary approach is fundamental for the creation of new professionals who are able to speak different languages of the project – underlined the professors Annalisa Dominoni and Benedetto Quaquaro – and that is why we have involved mechanical engineering students who work in groups with our design students to ensure the feasibility of new ideas. ”
The projects developed during the Space4InspirAction course will be presented on  June 6th 2018 at 14.30 at the Altec – Thales Alenia Space headquarter during an event that will also include an itinerant exhibition in Italy and abroad curated by the European Space Agency, including the ESA international conference in Bilbao.
“Space allows students to develop creativity with an intense visioning activity – explain the professors Annalisa Dominoni and Benedetto Quaquaro – comparing with a confined environment and microgravity that is not part of our common experience.
Through a new methodology that we have developed and called  UGD – Usage Gesture Design,
the design is not limited to creating objects, environments, architectures, but also new behaviors and gestures of astronauts in relation to the use of designed objects, environments and architectures. The projects also have a dual purpose: if on the one hand they are inspired by Space and define new visions, starting from real conditions and requirements, on the other they imagine new  spinoffs and  spin-ins, i.e. transfers of space technologies and behaviors that they can be applied to our daily life to improve it, and vice versa. We believe Space innovation will have a strong influence on people’s behavior and the role of design is to humanize technology to meet the needs of a sustainable society.”